By Paulinho 3rd November 2019 No Comments

Sunday 03/11/19 was the day of the BJJ Nottingham Open. A local tournament that sees teams from all over the country meet up and compete against each other. This year Five Rings Grappling Academy took 7 competitors across the kids and adults divisions.

First up to compete was George Foster in the Kids Teen 1 Under 60 kg division. George cross trains in both the Mansfield and Sheffield academies and so has plenty of training partners to help him in his competition preparation. It showed when he won the first fight in under 30 seconds by arm bar and the second fight (Final match) 18-0 after 4 minutes for his second gold medal of the month. He’s showing a great mentality for training and competition and made some very mature decisions in his final match. 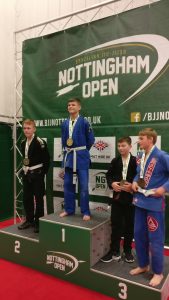 Second of the day was Marley Game in the Kids Junior 2 Under 38kg division. Marley also trains at both academies and for his age and weight has a really bright future. Marley is the kind of guy that will always fight right until the bell goes at the end of the match. He never stops moving and trying to get a better position. Unfortunately, this time he wasn’t able to get the win and was beaten on points. He was fighting a more experienced opponent though and, even so, showed some great Jiu Jitsu.

Third competitor of the day was Karol Kaczmarczyk in the Kids Junior 2 Under 55kg category. Karol has been training for a few years now and has always had a very bright future in BJJ and today in Nottingham he really proved to himself what he is capable of. Karol trains mainly in Mansfield but also comes to Sheffield once a week for the sparring session. He is 10 years old and a tough roll for everyone. Today he had 2 fights winning the first from an armbar from mount and the second by points. I know that this can be just the beginning for Karol as the bigger he gets the better he will be. 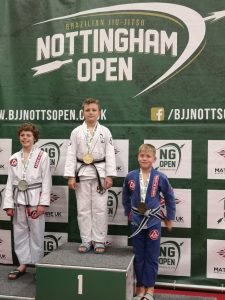 Fourth Competitor of the day was Mitchell in the Adult Blue Middle division. Mitchell trains in Sheffield mostly and is know to have a very good guard. Today, I think, he proved that by fighting an absolute beast in the first round. Unfortunately, he lost the match 4-0. It was very close technically and gave us some things to work on in practice.

Fifth fighter of the day was Adam Casey in the Blue Master 2 Middle who trains in Mansfield and had some bad luck with prep leading up to the competition. Adam is a guy that whether he is in the gym or competing is a tough match. He has long limbs and is strong and explosive. I always know that he will definitely give 100%. Today in Nottingham, he did just that. He didn’t get the result that he wanted but there was a lot of positives to take from his match.

Sixth competitor was Joshua Meek from Sheffield. Josh is a talented guy and can play a very tricky game for a lot of people. The trouble for Josh though is that he is a big guy with a purple belt. So there are lots of times when he will get emails from organisers saying that he needs to fight up a category. That happened today. With 3 people in the category the matches go as follows A fights B. The Loser fights C. The winner of that match then faces the winner of the first. Josh won his first match via points against a very tall, heavy, strong guy who then went and beat the third man setting up a rematch final. This was a great match where Josh was just a little off time in some sweeps that his opponent took advantage of. In the end, Josh took silver.

The last competitor of the day was Albert Greenhalgh from Sheffield. Albert fight in the adult white belt light weight division that will always mean that he has a lot of fights. He was coming away from London last weekend with double silver medals in his gi and no gi divisions. Today he put the small mistakes from last week behind him and secured the gold medal after 4 fights. Winning all 4 with armbars from the mount position. He has at least one more competition this year next week in Manchester, then we are going to Lisbon in January for the IBJJF Europeans. 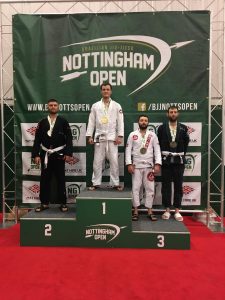 All in all it was a great day for the team. We took 7 competitiors and made it to 5 finals. I’m pleased with that as well as knowing what we can take back to the gyms to work on. Starting tomorrow we’ll be look at all of the little mistakes and how to get better. Carlos Gracie once said “you win or you learn” and while I don’t think that’s the mindset you should have going in to a match, I do think it is good to think back on.